by Diana Gabaldon. Dragonfly in Amber is the second book in the Outlander series. It’s now 1968 and Claire returns to Scotland with her daughter, Brianna. This is Claire’s first trip back to Scotland since her and her husband Frank visited 22 years earlier. Frank just passed away and Claire wants to learn what happened to Jamie Fraser, whom she married on her journey into the 18th century. Claire hopes Brianna will believe her story about who her real father is. The majority of the book consists of the second half of Claire and Jamie’s adventures in the 18th century. After escaping a death, they flee to Paris, where they secretly work to foiling Bonnie Prince Charlie’s plot to regain the Scottish throne.

I was concerned how Gabaldon would retain the Outlander plot in the second book without becoming cheesy. In Dragonfly in Amber Diana Gabaldon was able to preserve the travel between the 1900’s and the 1700’s without awkward story transitions. I enjoyed the character development in Dragonfly in Amber and I’m looking forward to Voyager, the third book in the series. 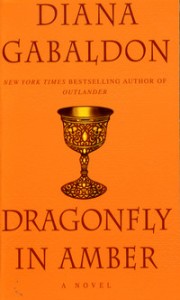