Patrick Talmadge Posted on December 22, 2009 Posted in Reading No Comments

by Dave Duncan. The Alchemist’s series features alchemist and astrologer Maestro Nostradamus and his nobly born apprentice, Alfeo Zeno, who narrates with panache. Duncan mixes a vision of old Venice and fantasy to create the world portrayed in The Alchemist’s Apprentice. In the Alchemist’s Apprentice, the first book in the series, Nostradamus foresees the murder of Procurator Bertucci Orseolo, who’s poisoned right beneath his nose during a dinner party. When suspicion falls on Nostradamus, Alfeo must solve the mystery. With the help from his adored courtesan, Violetta, Alfeo attempts to prove his master’s innocence. 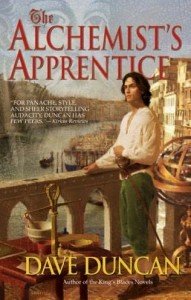