↓ Skip to Main Content
Home › Reading › Finished Once A Runner

Finished Once A Runner

Patrick Talmadge Posted on December 19, 2009 Posted in Reading No Comments

Finished Once a Runner: A Novel

by John L. Parker. Once a Runner tells the tale of Quenton Cassidy, a runner at Southeastern University whose lifelong dream is to run a four-minute mile. He’s less than a second away when the political and cultural turmoil of the Vietnam War leaks into the school’s athletic department. Cassidy is suspended after getting involved in a protest within the athletic department. Coached by Bruce Denton a graduate student and former Olympic gold medalist, Quenton gives up his scholarship, girlfriend, and his future to train for a head-to-head match with the greatest miler in history.

Once a Runner captures the essence of what it takes to be a competitive runner, devoting your life to the love of racing. I found the book extremely entertaining and accurate. The training that Quenton Cassidy performs in Once a Runner is similar to the training I used to do when I was racing years ago. Runners, ex-runners, or anyone interested in competitive running will find this book enjoyable. 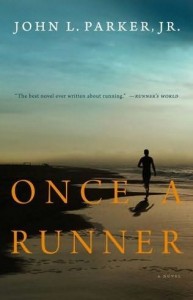