Patrick Talmadge Posted on November 6, 2009 Posted in Reading No Comments

by Ben Mezrich. The Accidental Billionaires is about the founding of Facebook and centers on the founders Mark Zuckerberg’s and Eduardo Saverin’s friendship as Harvard undergrads. They each shared both academic brilliance in math and a geeky awkwardness with women. Eduardo struggles for acceptance and finds himself joining one of the university’s Final Clubs, elite societies that have groomed generations of powerful men. Mark is less interested in campus life and college acceptance. One night Mark hacks into the university’s computers and begins to compile a database of all the female students on campus. This stunt crashed Harvard servers and nearly got Mark kicked out of school. From that project the framework for Facebook was born.

The Accidental Billionaires is an entertaining book, but you have to take the story with a grain of salt. Mezrich highly dramatized the story in the hopes to gain another movie deal. The main details of the story are accurate and true, but the majority of the book is drama and filler to jazz up a normally boring story about a website. Overall I found the book entertaining and a nice glimpse at the founding of Facebook. 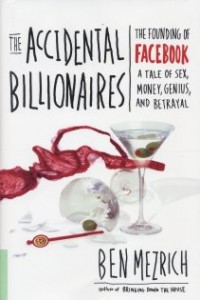