is a memoir by Paula Bernstein, a freelance writer, and Elyse Schein, a filmmaker. They each take turns telling the story of how they, at age 35, discovered they had an identical twin sister and their reunion. Despite different upbringings, education, and work experiences, the twins share matching gestures, allergies, speech patterns, and a the same taste in movies. The adoption agency, Louise Wise Services, will reveal only that their biological mother was mentally unstable and unaware of who their biological father was. The twins discover that a study was performed on several sets of sperated twins, unforutanlly the records of the study the agency conducted are sealed. So Elyse and Paula organize their own research project by reviewing birth records, tracking down their birth mother’s brother and interviewing researchers, who claim that twins raised apart are more similar than those raised together.

Indentical Strangers is an enthralling look at the lives of the twins as they are reunited. Much of the book is devoted to fascinating stories of other twins and triplets who, when reunited as adults, are shocked by how much they have in common with one another. This is an excellent book, I very much recommend it. 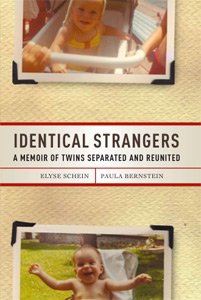