Finished reading In Nixon’s Web: A Year in the Crosshairs of Watergate

by L. Patrick Gray III and Ed Gray. L. Patrick Gray III was the FBI director for one year after the death of John Edgar Hoover, the first director of the FBI. Gray was the target of the Watergate attempts to have the CIA stop the FBI investigation of the break-in. Months later the Senate focused its attention on Gray, while the White House threw him to the wolves.

In Nixon’s Web is the firsthand account of Gray’s crucial year at the FBI. L. Patrick Gray reveals the conspiracy and betrayal that permeated Washington and he raises questions about the methods and motives of his top deputy, Mark Felt, the man alleged to be Deep Throat. The book was completed and expanded by Gray’s son, Ed Gray, due to his father’s death in 2005.

In Nixon’s Web is a fascinating book. I knew a little bit about the Watergate scandal but not that much considering it happened more than 10 years before I was born. I learned a good deal about Watergate from this book. The book is a one sided view of what happened after Hoover’s death but Gray’s depiction of his encounters are from a very high level position within the Government. Overall, In Nixon’s Web is very good book for anyone interested in learning more about Watergate. 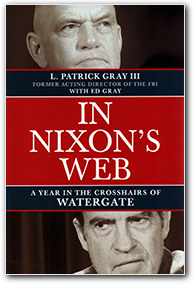