Patrick Talmadge Posted on May 4, 2009 Posted in Reading No Comments

by Brandon Sanderson. The population of Elantris, once the capital of the land of Arelon, has become a powerless society of tortured souls. Although unable to die, after the city’s magic inexplicably broke 10 years ago the city has fallen into disarray. When a curse strikes Prince Raoden of Arelon and he’s imprisoned in Elantris, he refuses to surrender to his grim fate. Raoden strives to create a society out of the fallen and to unlock the secret that will restore the city’s glory. Meanwhile, Princess Sarene of Kae, Arelon’s new capital, who was betrothed to Raoden sight unseen, believes Raoden has died. Sarene is officially declared Raoden’s widow; she must use her political savvy and wit to protect Kae from evil forces. Sarene must protect Arelon and Kae from Hrathen, a leader of the creepy Shu-Dereth faith, who aims to either convert Kae or destroy it within three months.

The beginning of Elantris was slow as the plot built up. I didn’t find Brandon Sanderson’s writing to be that good. However, partway into the book I really got into the story and I looked forward to finding out what would happen next. I enjoyed Elantris and I’m planning to look at Brandon Sanderson’s other books. 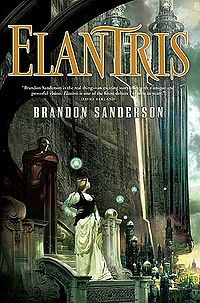