Patrick Talmadge Posted on April 22, 2009 Posted in Reading No Comments

by Stephen Coonts. Liars & Thieves is about Tommy Carmellini an ex-burglar turned CIA operative. The story begins with Tommy hanging out with partner Willie â€œthe Wireâ€ when his ex-girlfriend Dorsey O’Shea turns up asking Tommy to break into a house and retrieve some sex tapes in which she has unwittingly participated. Several months later, the CIA sends him to a West Virginia safe house where Russian defector Mikhail Goncharov is being questioned. Tommy stumbles into a full-blown massacre. He kills a couple of attackers and rescues a woman while trying to escape only to find out he is now being hunted.

The book was a little predictable but still an entertaining read. It had a few plot twists that kept me engaged in the story. Overall it was a good book. 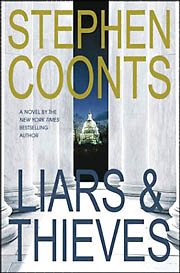