Finished Reading A Lion Among Men

Finished reading A Lion Among Men

by Gregory Maguire. A Lion Among Men is the third book in the Wicked series. In book we see Oz through the eyes of the Cowardly Lion. The Cowardly Lion was once a tiny lion cub defended by Elphaba in Wicked, the first book in the series.

While civil war brews in Oz, an oracle named Yackle prepares for death. Before her death Brrr, the Cowardly Lion, arrives searching for information about Elphaba Thropp, the Wicked Witch of the West. As payment, Yackle, who was involved of Elphaba’s life, demands some answers of her own.

A Lion Among Men was not as good as Wicked, but still a good book. 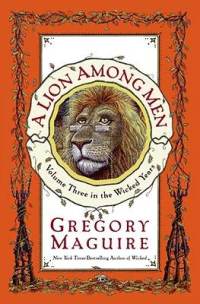