Patrick Talmadge Posted on March 15, 2009 Posted in Reading No Comments

I finished reading The Shack

. I found The Shack to be an interesting book with a unique religious backing.

The Shack is about Mackenzie Allen Philips’, Mack, and the trials and tribulations he endures while deepening his relationship with God. Mack’s youngest daughter, Missy, is abducted during a family vacation. Evidence that Missy has been viciously murdered is found in a old shack deep in the Oregon forest. Four years after Missy’s disappearance, Mack receives a mysterious note, apparently from God, inviting him back to the shack. Mack struggles with the decision to make the wintry trek to the shack. His discovery at the shack will change his world forever. 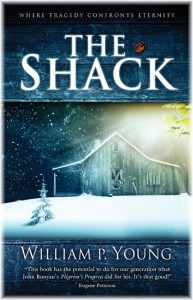